THE AUTHOR OF THE POSTERS 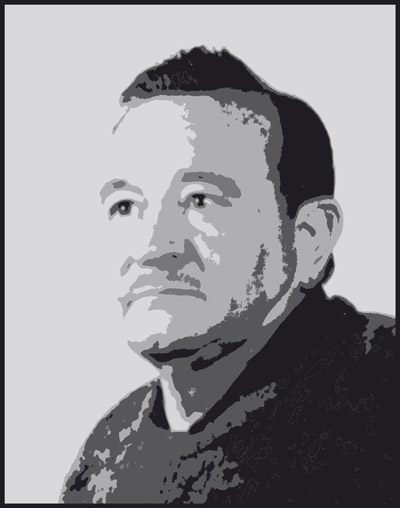 Son of a Valdeorresa family emigrated to Buenos Aires, where he spent the early years of his childhood, to return and train at the Salesian school in León. The Architecture career in Barcelona begins, interrupted by the Civil War and forced to return to the family house of Barco de Valdeorras. Here it is, where, through friends, soldiers displaced by the war, María Asunción Gómez Muñoz (“Doll”), with whom she will marry in 1947 and will have two children, is known and known. Since then it is established in Carballiño, Calle Mosquera 32, as a commercial for “Las Novedades”. At the same time he will teach drawing at the School directed by Don Xoán Corral. Adding to all cultural activity in a unique Carballiño for its commercial and festive life, in spaces such as the “Sporting Club”, creation of the Casino, organization of Carnival in the street and in several rooms. … Great fan of camping and caravanning, photography, filming, cinema and all innovation. He will even advise and act in several tourist films of prestigious directors about Carballiño, as well as promote the publication of postcards. Together with the electronics “Cerviño”, the installation of the TV relay pole in the Monte de la Medela is being advanced in Galicia, which allows to see the first broadcasts in the also innovative “Café Royal” and in some chalets …

Lover of graphic documentation and collecting. He collaborates integrally with several cinephile initiatives, with a 16 mm film crew, projecting in the “Social Assistance”. It participates limitedly in the family business initiative of “Cine Reque”, and also with “Alameda” and “Rivas”. He will do it as an advisor and himself as a signer of the advertising billboards, and even, in the absence of technicians, will perform the functions of a designer. In the sixties, being Councilor for Parks and Gardens, he took the initiative to repopulate the Park with native trees, promoting the “Tree Party”, a sensitizing activity that will include the participation of schoolchildren. Likewise, with Ramón Valeiras and Luís Padrón, among others, the first celebration, or great pilgrimage, will be dedicated to extolling a product of traditional Galician cuisine in 1962 of the “Octopus Festival”.

Given his ability to draw, especially for signage, he will be awarded and will stand out as a poster maker for the Carballiño Patron Festivities, as well as the “Octopus Festival”. Unconditional with the cultural association and with the parish festive traditions of the region. In the second decade of the twentieth century there were few, in the Lands of Carballiño, parties, protocols, cultural groups or companies that had not been headed with a banner, hype, flag or later meaning and labeled selflessly by the biographer. Like any artisan work, many of his works are made without signing: if the case in his poster production will be done as “FLópez” or “Felipe”.

“The posters of the” Festa do Pulpo “were all made by Felipe Luis López López, becoming authentic works of art for collectors.”

“As of 1996, the posters have been made by Felipe Senén López, son of Felipe Luis López.”